The Colonel John Butler Branch of the United Empire Loyalists' Association of Canada can trace its origins as far back as 1898, when Captain John D. Servos organized a branch in Virgil, which was an early settlement in the Niagara area.

This Branch did not succeed, and in 1905 another attempt was made, but this became inactive as a result of the Great War of 1914 - 1918.
In 1914, the United Empire Loyalists' Association of Canada was incorporated by an Act of Parliament.
In 1921 the St. Catharines and District Branch was formed, and it has remained active.  In 1992, the Branch petitioned the Dominion Council to change the name to the Colonel John Butler (Niagara) Branch, to honour this distinguished Niagara Loyalist.

The Col. John Butler Branch and its members have a common interest in Canadian history, with a strong focus on the United Empire Loyalists, those people who remained loyal to the British during the American Revolution and who came to Canada during and immediately following that war. These individuals and their descendants made enormous contributions to the development of the Ontario we know today.

A secondary focus is the genealogy of the Loyalists, as all descendants are eligible to use the post-nominal UE after their names. To help those who are interested in proving their Loyalist descent in order to earn a Loyalist certificate which many people frame and display proudly, the Branch has several members who have developed genealogical expertise and who are willing to direct and assist those who wish to explore their family histories. 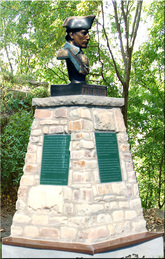 The Butler Homestead Monument was unveiled on Sunday, May 18, 2008, in the newly created Colonel John Butler Homestead Park in Niagara-on-the-Lake, Ontario.  It was designed and built by Jon Jouppien of JK Jouppien Heritage Resource Consultant Inc.; the four sided cairn presents a quartet of informative plaques.

Colonel Butler lived here with his wife, Catharine Bradt, who died in 1793.  Butler died in 1796, willing his estate to his sons.  Due to Butler's importance in Indian Affairs and his prominence in political life in Upper Canada, he was visited by army officers stationed at Fort Niagara, by important Canadians, and by influential Aboriginal leaders travelling to this area.

Along with a frame house, the Homestead included several outbuildings.  During the War of 1812, the Homestead was occupied by American soldiers after they captured the town of Niagara and Fort George in May 1813.  His Homestead was fortified by the Americans and was the focal point of several sharp skirmishes during the summer of 1813.  When the American army retreated in December, they burned the entire town, including Butler's Homestead.