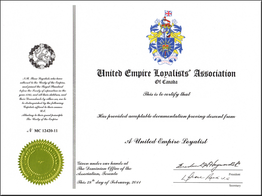 Who Qualifies as a Loyalist?

Today's Association is open to all those interested and supportive of Loyalist history and heritage.

To gain UE Status, in addition to membership, proof must be submitted and reviewed to ensure the following conditions are met:

Membership confers no special status in Canadian society, but many members use the post-nominal letters "UE" after their name, in consequence of Lord Dorchester's Order in Council in 1789, conferring recognition of the service of the Loyalists in defense of "The Unity of Empire."